It’s not going to come as a surprise to anyone that the Covid pandemic has pressed the fast-forward button on the already exponential growth of e-commerce. It stands to reason that if you’re not really allowed to go out, you’ve got loads of spare time and probably plenty of extra disposable income - given that all your holidays have been cancelled and you can’t go down the pub anymore - you’re spending more time online, which leads to more online spending.

The latest research from econsultancy bears this out, with some interesting findings on the speed and scale of that growth. Most notably the research predicts that as things start to get back to normal, while there may be some retraction, the split between physical and virtual spend won’t return to pre-pandemic levels with the proportion is anticipated to settle at 27% up 7%. 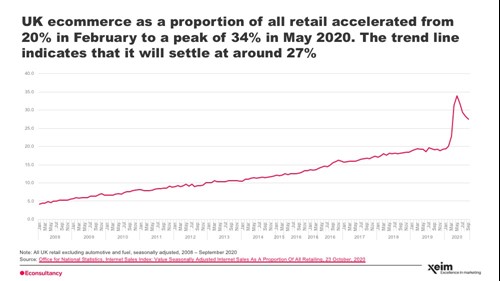 The research indicates that 25% of the population will make permanent changes to the way they shop, with spend redirecting into online channels. Nearly half of UK consumers say they plan to avoid busy destinations such as large shopping centres as a result of Covid-19 and 48% have shopped online for products that they previously only ever bought in-store. 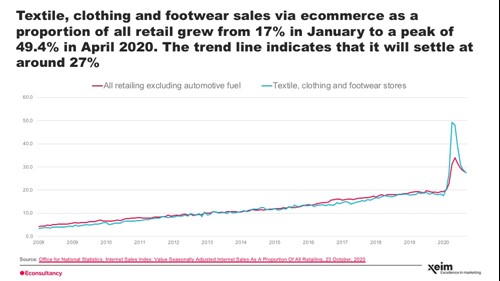 Ecommerce spend rose to 34% of all retail purchases during the first lockdown and is expected to settle at 27% which is a 7% increase from pre-lockdown levels. Some sectors, including textile, clothing and footwear rose to nearly 50% of all sales and online grocery doubled. 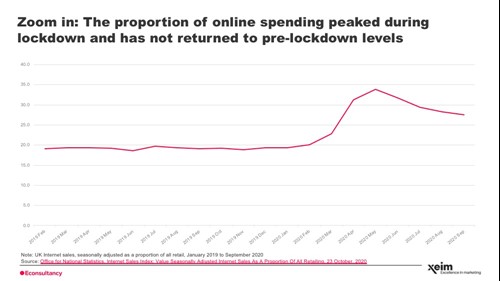 Pure ecommerce retailers, such as Ocado and Amazon have, unsurprisingly, seen huge spikes and rapid growth:

Demand for Ocado’s services in April was 10 times higher than its usual level for the time of year. Ocado, which specialises in ecommerce and logistics, was well positioned to meet demand when ecommerce’s share of UK grocery shot up from 5% in January to over 11% at the end of May. Ocado has also partnered with high street retailers to help grocery customers avoid “out-of-stock shock” and facilitate reliable delivery as consumer behaviour evolves. Ocado's growth has seen them named as the UK’s fastest growing brand in BrandZ's annual Top 75 Most Valuable Brands report.

The growth of the global behemoth Amazon was already staggering but the pandemic has seen this accelerate massively with Q2 sales increasing by over 40% up helping the company record $5.2Bn in net income for the three months to the end of June 2020 - double what it earned in the same period in 2019. Amazon also increased its delivery capacity by more than 160% in Q2 2020 to handle the demand for grocery which tripled in sales. The business now employs over 1 million workers.

As well as these online retailers, traditional ‘bricks and mortar’ grocery retailers in particular also saw increased demand. Asda, for example, doubled its online capacity during the pandemic to dispatch 700,000 orders per week and is planning to increase ecommerce capacity by another 50% to maintain market share. Notably, the budget supermarkets Lidl and Aldi missed the online grocery boom as delivery doesn’t fit their low-cost operating models.

Other high street retailers have had to adapt their business models and be innovative. Pret a Manger launched a subscription model called ‘Your Pret Barista’ in which customers can get up to five drinks per day, including smoothies, barista-made coffee, hot chocolate and tea. The idea is to give customers a reason to visit stores and instill loyalty among people who are transitioning back to the office. Pret also announced that it would be selling its coffee beans on Amazon and in supermarket Waitrose. This shift is part of a new strategy to ‘follow the customer’, which replaces its old mantra, ‘follow the skyscraper’ and is an example of a brand adapting to new expectations of customers to try and stay relevant and be sustainable.

The impact of Covid has seen other changes online, many that were already in motion, expedited. This includes features such as shops within social media platforms to enable small businesses to create ecommerce stores with product catalogues and checkouts within Facebook and Instagram. Facebook has partnered with eight third-party shopping platforms including Shopify, BigCommerce and WooCommerce to help businesses connect to Shop and a dedicated ‘Shop’ button will appear on Instagram’s main navigation later this year. The feature will allow small businesses to reach more customers at relatively little cost, except for any paid advertising.

The surge in online sales has also benefited the Buy Now Pay Later [BNPL] payment providers, although this very easy to access form of credit is starting to raise concerns about people’s debt levels. Market leader Klarna, which has 85 million users and 200,000 retail partners, allows consumers to pay for an item in three installments with no fees. PayPal launched a similar ‘Pay in 3’ service in which shoppers can split a purchase of between £45 and £2,000 across three interest-free payments. Retail partners include French Connection and Ryman. Nearly 40% of US consumers have used a BNPL service and it’s predicted that it could make up 9% of ecommerce spend by 2023, triple the proportion reported in 2018.

Some brands have used the opportunity to speed up their digital transformation programs and the move towards more direct to consumer sales. Nike’s vision is to create: “A digitally connected experience, where membership is a true differentiator” a strategy which is prioritising direct-to-consumer channels by cutting ties with thousands of retailers, including even Amazon. It seems to be working as digital sales increased by 82% in one quarter alone and the company achieved a digital sales target of 30% three years early. The benefits are obvious with access to data to create predictive modelling tools, data-driven member personalisation, streamlined distribution, better stock management and better digitial shopping experiences. The benefits to Nike are obvious with 10% higher margins and improved customer loyalty - customers who connect with Nike on two or more platforms have a lifetime value that is 4x higher than those who don’t.

There is thankfully some light at the end of the Covid tunnel with the vaccination program. But only time will tell if consumers will be as reluctant as predicted to start to revisit physical high street stores with caution naturally to be expected. On the other hand we might see a boost given that we’re all desperate to get out of the house and the experience of going to the shops, trying things on and having a coffee and a cake could be a welcome relief.

It’s clear that consumer buying habits have changed during the lockdowns and the increased acceptance and adoption of ecommerce means that, while levels may settle down as the data shows, ecommerce spend will be at higher levels than pre-pandemic. It puts further pressure on a high street already decimated by the loss of Oasis, Warehouse, Monsoon, Cath Kidston, Laura Ashley, T.M. Lewin, Debenhams, GO Outdoors, Edinburgh Woollen Mill, DW Sports, Oliver Sweeney, Harveys Furniture, Bensons for Beds and Victoria’s Secret. Retailers will need to optimise online experiences and innovate to meet this shift in behaviour and expectations. And they will need to invest in omnichannel capabilities to integrate online with traditional retail.